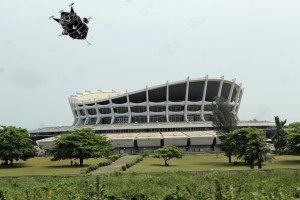 17h00: Tam Fiofiri and Funsho Ogundipe- The Speed of Thought 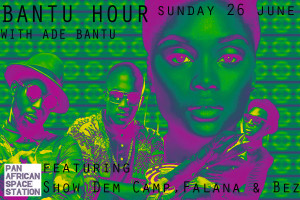 Adegoke Odukoya, better known as Adé Bantu (born 13 July 1971 in Wembley, London), is a Nigerian-German musician, producer and activist. He is best known as the founder of the Afro-German musical collective and NGO Brothers Keepers and as the front man of the 12 piece band Bantu. He received the Kora Award (the Pan-African equivalent of the Grammy) for his album “Fuji Satisfaction” in 2005. On Sunday’s show, he features Show Dem Camp, Falana and Bez The Show Dem Camp duo, both born …  ( continue reading

Lyricism and Lagos with Nigerian poet and writer Jumoke Verissimo. Featuring a live performance with musicians Edoato (Afrogenius Band) and Awoko. Jumoke Verissimo is the author of two poetry collections. The award-winning I am memory (Dada Books, 2008), and well-received The Birth of Illusion (Fullpoint, 2015). Her novel manuscript was longlisted for Kwani prize in 2012. Verissimo has travelled performed her poetry at major world festivals. She currently works as a content strategist, writer and editor in a Public Relations Company. Agbeniyi Edaoto is the leader of …  ( continue reading

Speed of Thought with Tam Fiofiri and Funsho Ogundipe

THE SPEED OF THOUGHT  is a discussion that examines the mental process that triggers the mind into the realm of spontaneous creativity as well demonstrated during solo improvisations in jazz music and, in stream-of-thought literature as well. Using music, poetry and historical references the panel will explore the Sun Ra Cosmic Equation which philosophises that, “Imagination is a magic carpet/Upon which we may soar to different lands and climes/If we came from nowhere here/Why can’t we go somewhere there?” This …  ( continue reading

Kọ́láwọlé Olúgbémiró Ọlátúbọ̀sún (born 22 September 1981) is a Nigerian writer, linguist, and teacher. He is a recipient of the Premio Ostana Special Prize for Mother Tongue Literature 2016. He writes in Yoruba and English.  ( continue reading

Featuring a music mix and discussion with Akintayo Abodunrin about Fuji, a popular Nigerian musical genre. Abodunrin is a writer and journalist from Lagos.  ( continue reading

Pan African Space Station at Freedom Park in Lagos, 23rd -26th of June 2016 The PASS pop-up studio as an intimate, improvisatory live space becomes one for entangling different realities and experiences – with participants and listeners prompted by ideas of utopia and oppression, history and the future, borders, time, art and technology. Recordings from the live sessions culminate in an archive of experiments: speaking, listening, playing, partying and community. From June 23-26, PASS descends on Freedom Park in Lagos, …  ( continue reading

The Jezebel Spirit with 9ja Feminist

Ayodele Olofintuade (9ja Feminist) is a writer, feminist (intersectional) and human rights advocate. Her first book, Eno’s Story, was the first runner up in the NLNG Prize. She’s written several books for children and teenagers. Her first full length novel for an adult audience, Lakiriboto Chronicles, will be published in 2017 by Farafina Books, Lagos, Nigeria. She has several publications online (both fiction and non-fiction). She presently runs an online blog, 9jafeminista, an intersectional platform providing space for the discussion …  ( continue reading

AlterNatives is a space of speculation that brings together artists, thinkers and innovators to think creatively on contemporary life as it unfolds. It is also about inserting the past into the unfolding future, taking what we can learn from its version of science, cultivated wisdoms and abandoned innovations. Through recorded conversation, thought experiments and workshops, this event series hopes to uncover some of our best kept secrets and push the boundaries of thought on the possibilities for a re-imagined Nigerian society. …  ( continue reading