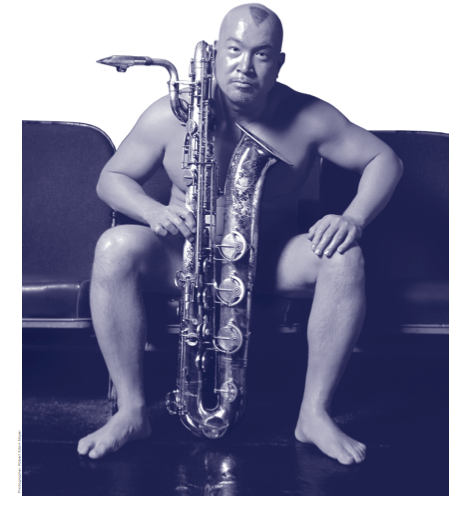 Home is where the violence is

‘Everything I create starts with the music… [and music]… like any conscious human activity, can be a force to change humanity, society and the world.’ Baritone saxophonist, composer, martial artist and revolutionary polymath Fred Ho (Fred Wei-han Houn) was born in Palo Alto, California in 1957 and grew up around the University of Massachusetts at Amherst, where his father taught political science. By his mid-teens, he was playing baritone sax in his high school orchestra and consuming everything he could learn about the Black Power Movement, the Black Arts Movement, the music called ‘jazz’, (Archie Shepp and Max Roach were on the faculty and their sons were his friends), and the emerging Asian- American movement. His ‘first insurrection’, he told the Harvard Review, was staged at home. He used his fists to defend his mother against beatings from an authoritarian father who, despite the academic distinction he achieved, still suffered racism, which he ‘internalised and took out on those at home’. After high school, Ho was undecided about his future. A brief foray into the Marines taught him more about the violence of arbitrary command structures, imperialism and racism, his resistance contributing actively to its brevity. It also taught him skills – particularly in hand- to-hand combat – that he would later employ and teach in situations he saw as demanding revolutionary self-defence: ‘I’ve never subscribed to turning the other cheek, or to pacifism.’

Fighting patriarchy at home made Fred Ho a militant. When he wrote his first opera score in 1985, Bound Feet, he attacked the Confucian practice of defining and restricting women through their bodies: a recurring theme in Ho’s compositions and texts since then. ‘I share the political view that violence against womyn [spelled this way by myself to take the ‘men’ out] will only end when womyn defend themselves by any means necessary and overthrow patriarchy.’ Ho saw all oppressions as rooted in capitalist patriarchy, and thus all struggles – for worker rights, immigrant rights, gender rights, land and environmental rights – as interconnected. He did not campaign ‘for’ women, with all the patronising baggage that position carried. He worked alongside women. His music, whether directly pro-matriarchy, such as Warrior Sisters (1991),Yes Means Yes, No Means No (1998) and Momma’s Song (2002), or more broadly radical, showcased the words of women, including poets Jayne Cortez, Sonia Sanchez, Andrea Lockett and Christine Stark.

On stage or record, female musicians and performers featured in the line-up. As a writer and editor, Ho valued ‘first voice’, so in the books women speak for themselves and their own self-selected images were seen. For a couple of years, from 1998, Ho edited the Calendar of Sheroes and Womyn Warriors. All the works are often searing in their honest naming of abuse, but defiance, strength and hope also resound: ‘The blues is not about sorrow, but about hope.’

Slow blues: From a whisper to a shout

Racially bullied at school, Ho read the autobiography of Malcolm X and joined (and left) the Nation of Islam before he entered Harvard. There, he joined the radical Asian- American organisation, I Wor Kuen, which later became the League of Revolutionary Struggle (LRS). He described moving from nationalism toward Marxism as Harvard taught him ‘what I did not want to become… part of the elite’, and as he and his comrades saw the interconnectedness of all struggles. That was an era when many radical organisations argued that national and gender struggles should be mentioned softly, subordinated to the bigger battle; either the revolution would solve them, or they could be dealt with ‘later’. That’s not Ho’s position today. There is space on his pages and in his grooves for Chicanindio poet and activist Raul Salinas, feminist writer Christine Stark, African-American saxophone colossus Sam Furnace, Persian-American vocalist Haleh Abghari, and too many more to number. The battlement-shaking shout of protest in his work is made up of diverse voices, each confident in its identity, all hollering together.

The diversity of militant voices in Ho’s work owes much of its inspiration to the Black Arts Movement (BAM), which flourished between the mid-1960s and the mid-1970s. For cultural workers around BAM, art was a powerful tool for social change. To enhance its punch, inspiration was drawn from multiple sources, and art forms and codes of expression – words, images, sounds – were integrated and deployed in iconoclastic ways.

Buddhist monks used hollow fish-shaped wooden blocks to strike rhythm while chanting the sutras. The practice was adopted by Taoism and much later fed into the Gold Mountain lyrics: workers’ songs by Chinese immigrants to America. By legend, the fish never sleeps: it’s all about wakefulness and so is Fred Ho’s work. Political, academic and mass-media hegemonies have rendered words like ‘struggle’ and ‘revolution’ unfashionable even when they are the most useful words for certain realities. They have buried the histories of militants, such as jazz trumpeter and composer Cal Massey, inside whose music ‘one could hear the Black Panthers marching’. Ho tells it like it is, restoring memory, replacing linguistic fashion with revolutionary style, waking up our ears and tongues again to the discourse of change

This is an excerpt from Gwen Ansell and Salim Washington’s story, originally published in the April 2013 edition of the Chronic.