In a city where the boundaries between life and death are laid bare, artists are birthing new spaces for dreaming ‘other ways of breathing’. Stacy Hardy reports from Kinshasa.

Art is the strength to make reality say what it would not have been able to say by itself or, at least, what it might too easily have left unsaid,” wrote the Congolese novelist and playwright Sony Labou Tansi in 1985.

Writing out of the turmoil of post independence, Sony’s texts posed a challenge to the corrupt body politic of both colonial and post-colonial Africa. “To be a poet nowadays,” he claimed, “is to want to ensure that, in the face of guns, in the face of money (which in turn becomes a gun), in the face of received wisdom (upon which we poets have the authority to piss), no aspect of human reality is swept into the silence of history.”

Dancer and choreographer Faustin Linyekula is precisely such a poet. His realm is the stage, his medium is the body, but his work is defined by a similar quest for truth – a truth arrived at not by defending reality or by embracing illusion, but rather, like Tansi, by seeking out a physical language that breaks the assumptions of both reality and illusion; a truth that can birth new spaces for dreaming “other ways of breathing”.

Life and a Half

It is this desire for a new sense of truth that provokes Linyekula to return to the Congo after years in exile dancing his way to fame in the capitals of Africa and Europe. There he creat 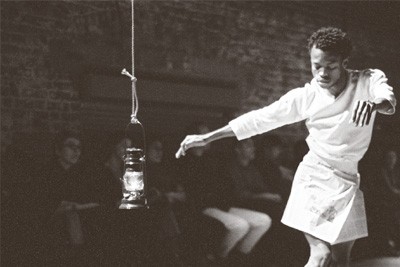 es what has become known as Studios Kabako, a network of emerging artists spanning the world; a home for dreamers that encourages “a fluid movement between the social and the artistic”.

The company has its roots in Kinshasa, the capital of the Democratic Republic of Congo. Once “Kin la belle” of Linyekula’s childhood, now “Kin la poubelle”, a city in ruin, haunted by the ghost of Mobutu Sese Seko and shaped by intense strife between the energy of its survival economy and the horror of life.

It is a city perhaps best described by fiction. The phantasmagorical Kinshasa Tansi evokes in his novel Half and a Life, where the boundaries between life and death are cracked, lacerated and laid open. “This became a land of bodies and blood,” he writes, populated by “the living, the dead, the nearly dead, the ones who wouldn’t leave… the halves, the limbs, the chunks… men and woman for who life had no purpose but to kill life…”

“I asked myself, how do you invent islands of beauty in such a chaotic space?” says Linyekula. “That’s where my work finds its energy. And yet I don’t only want to tell stories of ruins – all the ruins inside us, all around us… Sometimes it seems everything is hopeless. The abyss is so deep. How can I imagine a way forward? What are the remaining spaces of dreams that people have?”

He looks to Kinshasa’s music culture, the songs, dances and fashion that have so long been the lifeblood of the city. Antoine Moundanda’s kisansi-rumba of the 1950s; the independence cha cha cha of the 1960s; and François Luambo Makiadi, a.k.a Franco, the voice of Mobutu… but also the voice of the people.

“Kinshasa, Mboka ya Makambo,” Franco sang, “City full of problems/ Kinshasa, city full of liars/ They want me to flee kin/ But if I flee, their lies will be seen as true.”

But now the subtle interplay between truth and lies, sycophancy and subversion embodied by Franco are increasingly threatened by consumer cults characterised by vulgar expediency and infighting. The body, Tansi warns, can also be a traitor: “it sells you to the outside world. It puts you at the disposition of others.”

“Back in my country after several years… all of Kinshasa seems to live only for appearances,” says Linyekula. “Appear rich and strong… shine at all costs. Concerts invite you at 9pm. Don’t come before midnight but be prepared to stay until dawn. Drink, dance and flirt. Musicians… singing their own praises, power, beautiful women and expensive stuff, designer clothes and luxury cars.”

The soundtrack is ndombolo, a music whose driving rhythms and sheer physicality offers the possibility for liberation from war and oppression, but simultaneously risks perpetuating the very violence and subjugation it seeks to transcend. “Violent assault taught us what lungs are used for,” as Tansi puts it; music becomes a radioactive buzz that transforms dancers into “diameters of meat smelling like wine… those dead eyes, those laughs… those wretched asses.”

“Today in my country,” says Linyekula, “we need to dream. Music was one of those spaces. But today I look at Werrason, Fally Ipupa, Koffi Olomide, Mpiana – all the big shots. They think that the answer is to show off. To say, ‘I am the richest around’ – to sell that dream… Musicians become beggars, glittery beggars but beggars. Then you realise how tragic our situation is. When you see the moral, intellectual, material misery of the people who should make us dream, then you understand how much shit we are really in. Then you ask yourself what can be the future… ”

Out of this seeming emptiness Linyekula creates Kabakos Studio’s first performance, Spectacularly Empty II (2003). An empty stage, bare bodies set against the superficial abyss of a screen, a hypnotic transparency which simulates and denies space at the same time. The contrast between illusion (which is spectacular) and reality (which is empty), but also the spectacular emptiness of the naked body set against the emptiness of the spectacle.

He invokes Franco, his childhood hero. The company performs The Dialogue Series: i. Franco (2006). Franco’s story: “A boy who came from the streets, Leopoldville as it was then, who educated himself into music, into life. Who with his guitar and voice communicated something that spoke to and of his generation… how did he manage to capture that energy? I go to Franco to learn.”

Alone on stage. Franco’s music drives Linyekula as he punches into a boxing bag. A gruelling marathon. 12 rounds. “Almighty OK Jazz. We entered OK, we came out KO.” He is Franco. He is Muhammad Ali taking down George Foreman at Stade Tata Raphaël in Kinshasa in 1974.

He re-enacts Ali’s rope-a-dope technique, goes to the edge. Maybe, he thinks, truth then is like gravity, it does not reveal itself through rational thought or descriptions. Only by releasing our human grasp of something and entering into the space of unknowing can an object fall and gravity be revealed. Perhaps, as Tansi tells us, “the body is the only bottomless thing in the world.”

Abundantly layered in an intensely personal language of the self, The Dialogue Series: i. Franco culminates in an affirmation of the body as one’s “only true country”. It shows that what is most meaningful in living can be uncovered in the scattered traces of our individual and personal experiences.

Says Linyekula: “The process thus far has been that everyone who takes over power, rewrites history. So as an artist I need to stop fighting. To take what everyone has said and see where I personally stand. So the question becomes: ‘how do I say my name in the middle of all this?’”

This here is my city

During 2006 Linyekula moves Studio Kabako from Kinshasa to Kisangani, the city of his birth. Capital of Orientale Province, Kisa is a city at the heart of the war, ripped open by violence and mineral extraction. But if Kin’s ruins are haunted by Mobutu, it is Patrice Lumumba that haunts Kisa.

“This here is my city,” the leader of Congolese independence said in 1961. A city then, also of hope, Kisangani redefines Studios Kabako – a dance and theatre ensemble, a communal place for exchange. 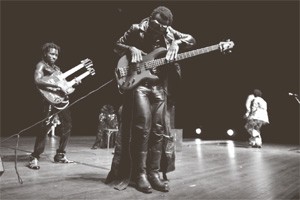 Linyekula recalls: “I started to realise, yes, it’s an unstable territory. At the same time there is a common denominator: the body. All history, all of the present can be defined by forms of violence against the body – its sophistication, its evolutions. One hundred years back: Belgium. The violence with Mobutu’s regime. More recently: cannibalism… It’s too big! How can you speak about this? It’s impossible. So I thought maybe this body will tell me the truth. I’ll shake it a bit and see what it answers.”

The answer came as last year’s Dinozord: The Dialogue Series iii, Studios Kabako’s first piece created in Kisangani. A deeply personal narrative that employs what Tansi calls “passwords of flesh,” creative strategies that can “send the body back to hope” and “provoke meat to leap”.

“In the middle of this destruction the only way of being subversive is to be positive. The punks from Europe and America in the late 1970s said ‘no future’, but they could afford to say that because there was a future there. Here we are in a context where there is only destruction. If I want to be a rebel I have to be positive. I just have to be constructive and say ‘more future…’”

“More future” became more more more…future, the title of Studios Kabako’s new work, currently in production. Its title suggests the trajectory.More more more…future is a work based on excess and scattering, an aesthetic of sensuous surplus, overload and over-elaboration. Yet, it is not spectacle – for there can be no spectators. Everyone present is implicated. 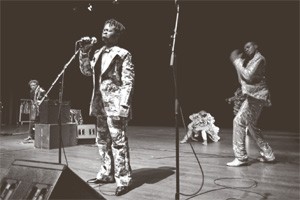 Performance itself is implicated. Its inspiration is ndombolo dance culture. Its subject is the show trials and public executions that have replaced theatre in the Congo. It lays bare the messy collusion between ruler and ruled, the grotesque moments of duplicity and complicity that have come to define life.

“So the form emerges. It’s music but it’s music that only makes sense when it has a physical impact. So we will turn up the volume. It has to be loud so we’ll stop hearing all the noise – NGOs, politicians, propaganda, statistics. So I can hear the sound of my body and then the sound will get the bodies to move.

“But these bodies need a shell, a skin. So I turned to Lamine [Badian Kouyate, founder of the Paris-based label Xuly Bet]: ‘can you create a shell for these bodies?’ On top of all that I called a friend who is in jail – the poet Antoine Vumilia Muhindo, who was arrested and sentenced to death in 2001. I asked him, ‘from where you are, sentenced to death for treason, what do you hear?’”

Muhindo’s reply came as a “dog’s soliloquy” – words, not as symbols, but as pieces of living tissue. Not spoken, not enunciated but flung. Lamine’s costumes: not clothes but literally skin, prosthetics that transform or extend bodies. The movement is not even dance. It predates the choreography of dancing – it is the body manifesting itself and manifesting us – feet communicating to a pitch of fury that is life, is love, is death.

The music, which anchors the project, is directed by acclaimed guitarist Flamme Kapaya, a graduate of the ndombolo factories of Wenge Musica Maison Mère and Werasson. But here ndombolo’s ecstatic energy and physical power is turned against commercial ideologies of containment and control. The music infects bodies, pervades and infiltrates them, and in a turbulent explosion of noise ungrounds death – life feasting on death or a life-infested death, an unthinkable intensity of life.

More more more… future is not an easily locatable cultural mimicry, but a rogue arsenal of displacements and delirious incantations. The violent, vulgar aesthetics of power that characterises commandment is invisibly turned against itself. A different form of power emerges within this very moment, generated by the body in movement. The body becomes a rogue space once more. It traffics in the unspoken. It steals and scavenges, displaces and reinstitutes the world with which it plays.

This story was originally published in Chimurenga 16: The Chimurenga Chronic, available here in print or PDF.