Taking his first pilgrimage to the Grahamstown carnival, our PASS Chi-laaitie Joshua Adams reports on South Africa’s much hyped prince of pop. 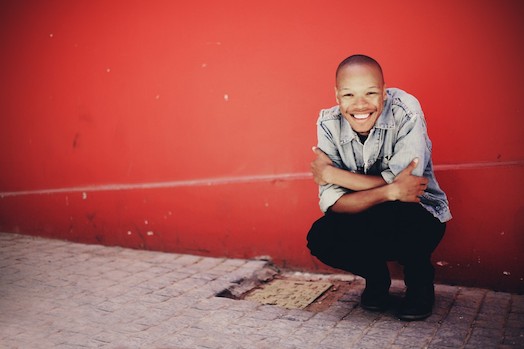 The cold, dimly lit venue had a pious calm to it. Blue and orange back-lights illuminate the set of drums, a keyboard, a couple guitars, and laptop, as the performer Nakhane Touré prepared to rock the crowd. It made sense that everyone was sitting, listening attentively as if this show was mass and the stage was the altar. Touré is playing at St. Aidan’s chapel for the National Arts Festival.

Having a concert in a church is a pretty… eclectic choice. The queue to get in was surprisingly short, considering fans and music critics like Bongani Madondo of Rolling Stone South Africa (who Touré was a cover for) consider him “the most formidable of all rising stars of the last decade, not only in the local but also the international music firmament.” In the US, gracing the cover of one of the world’s most prestigious magazines means you’ll probably never perform at a small venue again (if you sung in the shower, there would be a crowd gathering outside the bathroom window). But maybe that’s just another funny paradox about the show and the artist. Even a draw as big as Nakhane wouldn’t persuade people to come to church. So for the most part, this pastor would be preaching to the faithful, not the ones who could use a bit of The Word.

“I am a pastor and y’all are the congregation,” Touré smiles, aware of the myriad of contradicting metaphors performing in this place creates. “Thus sayeth The Lord.”

The crowd clings on to every note with a reverent silence. Nakhane starts off the show looping choral notes into the microphone. The way he uses the loop pedal has this Holy melancholy to it. As each layer adds on and the echoes intensify, the church is filled with Touré’s voice. It takes you higher and higher towards the light at the end of the tunnel. It’s the sound of ascension.

As soon as the choir reaches its apex, Nakhane stops the loop cold, and goes into the afrobeat bounce of “Tabula Rasa”. It reminded me of baptist church services, starting off with soft, pious organ playing as the saints and sinners march in, then switching to uptempo praise music. The room is energized for a high Hallelujah atmosphere and it gets the Blood of Jesus flowing. 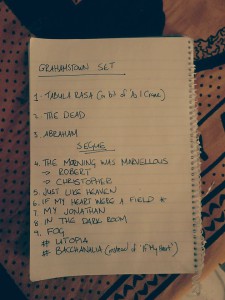 Before attending the show, I had never heard of Nakhane Touré, so this was very much a blind introduction to him and his music. Looking him up afterwards was easy.

The language of online search engines is archaic, meant to show what people are concerned with the most. When you Google his name, the first thing that comes is his first hit single entitled “Christopher”.

The second thing to pop up, “nakhane touré gay”, puts the first into context. Christopher is a Manchester expatriate Nakhane met online, and their virtual courtship later blossomed into the title of lovers.

For some, open homosexuality is blasphemy. If this was the United States, right-wing extreme religious groups would be picketing outside, holding up Bibles like torches, chanting  “God Hates Gays” to smoke out the sinners. If this was Uganda, the concert wouldn’t have happened. And in the small chance that it did go on as scheduled, The Good Book might have been replaced with weapons, ready to “rescue” gays from their “abnormalities”.

Regardless, Nakhane holds his fiery orange electric guitar like a lover. He sings amorously and deals with spirituality in just about every song on his critically acclaimed debut Brave Confusion. On “Robert”, he talks about spending eternity with God. In “Utopia”, he sings about a chorus of angels and walking into the pearly gates. And in his thank you notes for the album, he writes “First and foremost and at the core of it all, I want to thank the Father, Son, and Holy Spirit for the gift of music, and salvation.”

For the song “Abraham”, he switched to an acoustic guitar. It’s another one of those metaphorical moments. One man, switching between two guitars, singing about the Father of the Three Faiths. He begs “don’t take me away” from a pit of anguish. It’s like Nakhane doesn’t want to ascend into heaven if it means leaving his lover behind. And if his soul happened take the elevator down, maybe this abdominal love would bring them to the same inferno; an abysmal version of heaven where they can at least be together. Playing this show in a church are equal parts controversial, blasphemous, revolutionary, the devil’s work, divine calling, and ironically appropriate.

The irony of it all becomes more and more apparent with each lyric and note. If he is a sinner, what better place to perform than a church? Church is where the sinners go to be saved, but counter-intuitively, he wants refuge from the outside world, not from himself. Being openly gay in South Africa can be life-threatening. Society goes to deadly lengths to convince him (sometimes successfully) that even God bemoans his existence. That’s where the confusions comes in.

But the same Word that condemns him says his love will save him. 1 John 4:16 says that “God is love, and all who live in love live in God and God lives in them” (NLT). If you need to know where his bravery comes from, look at 1 John 4:18. For the haters, 1 John 4:20. And as he strums out his song “Fog”, he sings “The devil I know will try to stir up in me / a vengeance that is not mine.” I think that was a shot aimed at homophobes who use religion to justify their hatred. He will be gay and Christian, even if the world says the two are antithetical. His struggle is to please God, not you. And he’s no longer interested in figuring out if his love should have an asterisk by it. 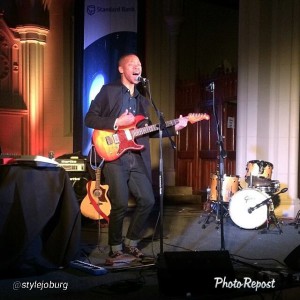 He thanks his loved ones in the audience for supporting him. For some of his family and friends, this show is the first time they got to see him perform. He then switched back to his electric guitar for most of the rest of the set. In between songs, Touré makes friendly jokes with the small, intimate audience. He joins the crowd in a laugh at his self-deprecating jab.

“You don’t laugh at your pastor. You talk about him behind his back after church”.

The bounce of “Christopher” sparked the crowd to new life. People got out their chairs to dance with the beat, losing themselves in the music. I doubt St. Aidan’s has shook like that in a long time, if ever, and the atmosphere morphed from an intimate concert into a South African-style revival. The end of the song was disrupted by delayed and reverbed dissonance as he slid up and down the guitar. Some would try to intellectualise how cacophony can sound good. It didn’t. But it was an intentional mood disrupter. I guess Nakhane was trying to bring everyone back down to earth.

Nakhane ends the set and everyone gets up to applaud him for the good show. People file out of their seats, chatting about the performance as they exit or hurry to the merchandise stands to buy t-shirts and CDs.

The show was a lot to take in, and at times, I was confused on how I should feel about it. Being a heterosexual Christian and a progressive can be clashing identities. I stand in solidarity for equal rights for the LGBTQ community, but if you had asked me before the show would I like to go to watch a gay contemporary rock artist perform in a church, I would’ve made an excuse not to go. In fact, the only reason I came in the first place was because all the shows I requested with my press pass had either passed, got cancelled, or sold out (enter a “cliché” about fate and how there are no coincidences).

As a lover of music, I wasn’t blown away by his technical skill, but the spirituality of his music definitely affected me. You don’t have to be gay to empathize with the existential angst that comes with faith; flipping between loving sin and needing salvation, rejecting the world for God and vice versa, apathetically judging others while not wanting to be judged, believing despite the ocean of reasons not to, having a million questions and only One answer.

Maybe Nakhane’s bravery rubbed off on me. It gave me courage to stay, to open up to his experience, to wrestle with my own confusion, to raise new questions, and find new answers. For that, I am glad.

Nakhane Touré knows how to take ’em to church.