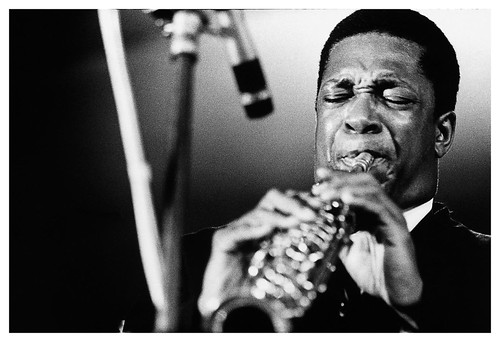 PASS easily has the most well-timed period in the sense that it runs from Steve Biko Day to Bheki Mseleku Day. Halfway between these two dates lies John William Coltrane Day, 23 September.

This day marks the 84th anniversary of John Coltrane’s birth. It has been over 40 years since he left us, but his influence is still felt as well as being a topic of debate. It is for this reason that we have over the past 2 PASS periods observed and celebrated this day. This year’s version has been extra special as we’ve celebrated the music of Coltrane by digging through crates (virtual and otherwise) of some of the living artists (related and non related to Coltrane) who have either worked with him or have been significantly influenced by his work to the point of being touted as the living messengers of his message and his sound today.

Through Coltrane’s influence I’ve spent the set traveling the Interstellar Spaces from Africa to Azerbaijan via Zimbabwe and beyond.

I’d like to consider the question of Coltrane’s influence a bit more, but I’ll have to listen to a bunch of records and think about this for a while. In the meantime, there is the music…