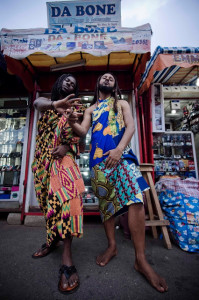 Fucking with the puritanical social mores that pervade the world’s most religious country is the clear and conscious intent of Ghana’s popular and controversial hip-hop duo, the clever FOKN Bois, writes Nana Darkoa Sekyiamah.

M3nsa and Wanlov the Kubolor are the FOKN Bois: controversial, unapologetic and boldly venturing into territories that other Ghanaian musicians stay well clear of. The duo met as college students in 1997, and Wanlov would “lie to M3nsa’s teachers that M3nsa was needed at the school administration block by staff, and we would run off to freestyle rap all day”. Their reunion a few years later led to the creation of the FOKN Bois, whose music is woven from the persistent threads of religion and sex.

Sex in Ghana, the world’s most religious country, is an act reserved for the most private of spaces. Public discussions on the subject are puritanical. The FOKN Bois take the extreme opposite view. Their song “Beatrice”, for example, describes in techni-colour detail an intimate sexual encounter between Wanlov and Beatrice, an upstanding member of the church:

References to sex in Ghanaian music are not unique. After all, everybody knows what “small girl you don’t know the ting” means, no matter what rapper and hiplifer, Atumpan (Franklin Elinam Cobbinah), has said in interviews. But Ghanaians like sex in music dressed up in allusions, metaphors and double entendres, which is why lyrics such as “C d way yor toto under foh/Like 3+1, ma sausage in yor sore/U like it just d way i like it… Raw/Yor inside corr like ripe pawpaw” in “Beatrice” would give many cause to pause. The song taps into a universal conflict, one that many religious people feel when caught between the desires of the flesh and the aspirations of the soul. FOKN Bois have described it as a new genre of music: Gospel Christian Porn Rap.

Given the fundamentalist, conservative “do as I say, and not as I do” brand of religion that has swept the continent, it is high time that someone pricked the conscience of the religious. And why use a needle when a sledge hammer will do the job just as well? That appears to be the rationale behind “Sexin’ Islamic girls”, a single off the Bois’s FOKN Wit Ewe (2012) album. On YouTube, it is introduced with the text: “Everyday when the Boko Haram go off on various missions, the FOKN Bois keep their wiveses (sic.), sisters and daughters company.”

If you’re wondering what deep ideological thoughts inspired this song, wonder no more. The duo is clear about where the inspiration for “Sexin’ Islamic girls” came from:

No one knows for sure what FOKN stands for, although its implied meaning is fairly obvious. On some occasions, M3nsa and Wanlov have said it means Foes of Kwame Nkrumah, yet they express gratitude for figures like Nkrumah, Patrice Lumumba, Nzinga (Queen of Matamba), Yaa Asantewaa and Cheikh Anta Diop in their song “We dey thank you”. In the online introduction to their music video, “Jesus is coming”, they write that “FOKN Bois have repented & are now born again. FOKN now stands for For Our King Now. We wish to raise Jesus above the heavens.”

It appears that living in the world’s most religious country is a constant source of inspiration for the FOKN Bois. “Jesus is coming” features M3nsa as Jesus, who has returned to Earth/Ghana in 2013 AD and is talking to a group of children about azonto, sex and what turning the other cheek – the bottos cheek of a woman – is all about.

This is an excerpt from Nana Darkoa Sekyiamah‘s story, originally published in the August 2013 edition of the Chronic. To read the article in full, get a copy in our online shop (print or digital) or visit your nearest dealer.