We thank Roger Young, for being with us throughout our 2010 orbit, for Niklas Zimmer and Yasser Booley for living and loving it behind the lens. 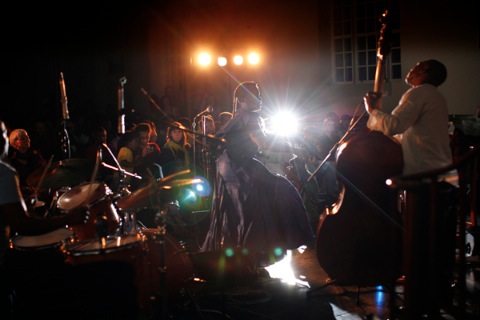 The Slave Church in Long Street is filled with an open heartedness that seems to warm and radiate off the walls; from the people filled wooden pews and the old altar with its two rickety wooden flights of steps and velvet banner proclaiming “So Se Die Here” to the thin wooden balconies above that are packed with people leaning forward. The MC announcing Thandiswa Mazwai peppers her dryly factual slam poetry cadenced introduction with many “perhapses” in order to temper her praise. She needn’t have bothered; from the moment Thandiswa steps out onto the floor below the altar, less than a meter away from her audience in the front pew, wearing a blue winged almost matric dance-esque dress and a beaded crowned mohawk, it is obvious that there is nothing “perhaps” about her.

The band starts slow and gentle on a nu-soul tip, a gentle swirl of brush drumming, muted keys and lazy double bass. Thandiswa borrows a lighter from a photographer down front and lights the imphepho to a smattering of applause. She closes her eyes and drifts into the flow of the music, away from the mic, her voice distant and strong, slowly building into a gentle gruff wail, like dipping your hand in a river and scraping your knuckles on stones. Throughout the next hour and twenty minutes, her band builds jazz riffs up to her high soul towering out of body experience, she evokes Busi, channels spirits and breath rituals, heartbreak and love songs. She stops between songs to pull the audience into traditional Xhosa call and response sing-alongs and gets rid of her stuff in front of us in a way that, by the time she is pulled back on for a lengthy encore, has the whole church pressing forward and singing along in some kind of high unleashing religious joy, the balconies leaning toward her, overflowing with love and reverence. 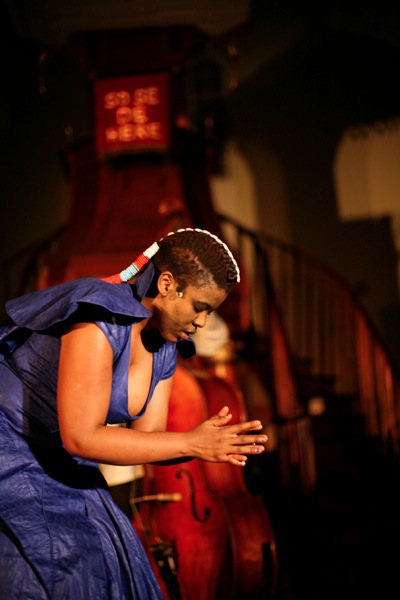 It’s taken me over two weeks to finally admit to myself that I will never be able to adequately put down in words anything that remotely describes that evening. It was the perfect combination of artist, venue and audience. This is the genius of the Pan African Space Station. With a confluence of minimal marketing and total respect for the musicians they manage to create a space whereby not only were exceptional artists performing in beautiful venues with incredibly intuitive sound engineers, but they were performing to audiences that were there for the music and not the social event or hipness quotient.

Not every show was perfect however; the sound tunnel at Albert Hall made it hard for anyone but those in front to enjoy the Imperial Tiger Orchestra’s Swiss interpretations of Ethiopian Jazz and at the sold out show in Langa at Gugu S’Thebe, on the last Saturday of the live performances, Georgia Anne Muldrow and Declaime, the LA bass heavy and very basic Black Conciousness spouting duo kinda got away from the spirit of the moment in their enthusiasm for playing: “In the location, In Africa, In the hood”. With Muldrow’s angry eyebrows and belief in the children and Declaime’s certainty that everyone was there just to see them “back in the motherland”. They overplayed their hand and forced Dr Philip Tabane and Malombo to have to end the day with a very short set. That’s just disrespectful. Noted also was the fact that G&D did not stay to watch Tabane nor were they seen at very many of the other PASS live shows. Their ideology may be Black Consciousness but their actions were American Imperialism. In the spirit of PASS the sour note did not linger and when Malombo got on stage for their short set the rapidly fading light enhanced the spookiness of Tabane and somehow bought the energy back into the space Thandiswa Mazwai and Johnny Cradle had left it in earlier. 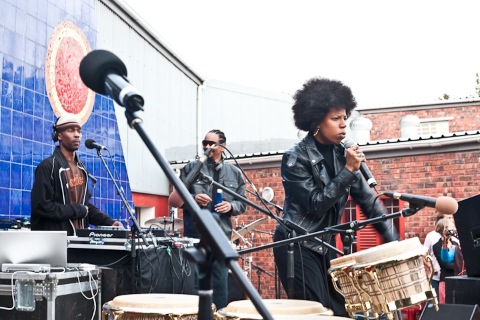 Later that night at the PASS SPACE 2 after party, audience and musicians bargained the barman down, danced like deranged leopards and radio station director Ntone Edjabe said, before sinking into a couchy thing, “the live music may be over but I still have a radio station to run for another ten days” and then later busted out a set ranging from Leela James to Peta Teanet.

It was a month long music festival that encompassed venues such as the arts center in Langa, the Slave Church, St Georges Cathedral and The Albert Hall and musicians ranging from Studio Kabako, to Brice Wassy’s rhythmic in your faceness and Theo Parrish’s turntablilism. Then there was the drop in anytime and dance HQ with it’s online radio station featuring a perpetual party of scathamiya, hip hop, jazz, Shangaan electro and mbaqanga and live performances like Righard Kapp’s post rock guitar sounds, the Brendan Bussy Trio and a tribute to Busi Mhlongo by Ological Studies. But it was the principle of respect for the artists and the music above from the audience and the organisers, that ultimately elevated the whole endevour above any other music showcase or festival I have ever witnessed.

PASS 2011 cannot come soon enough. Until then, there are archives of the last three years of music at The Pan African Space Station. 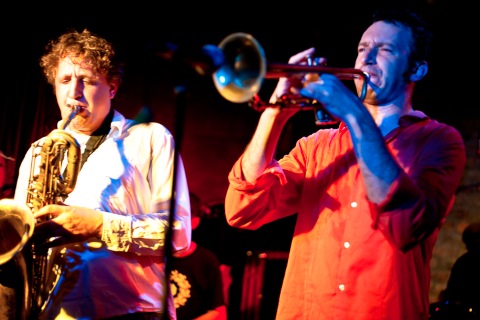 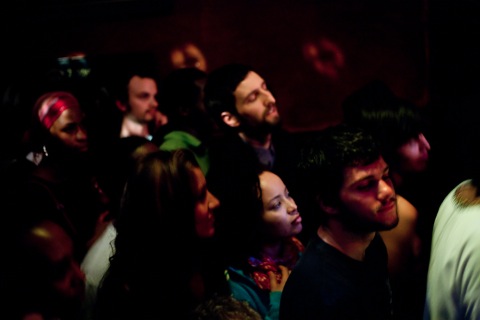 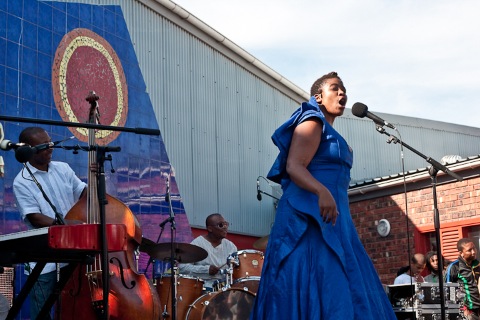 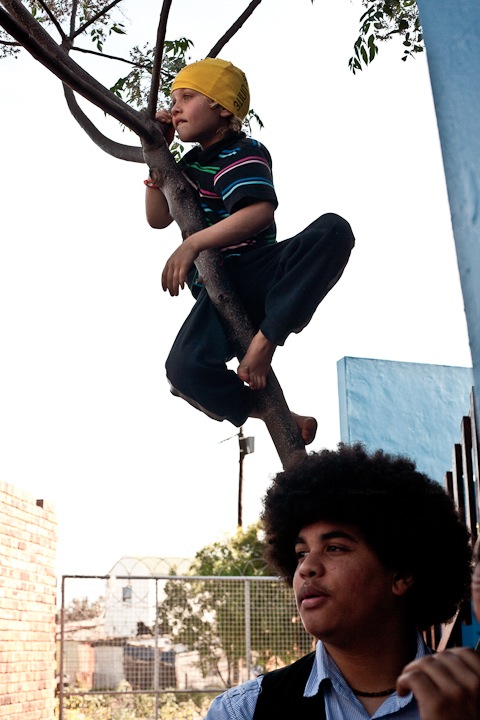 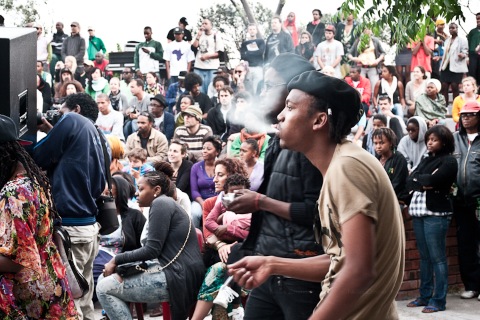 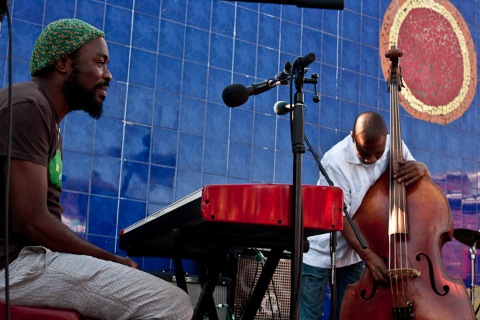 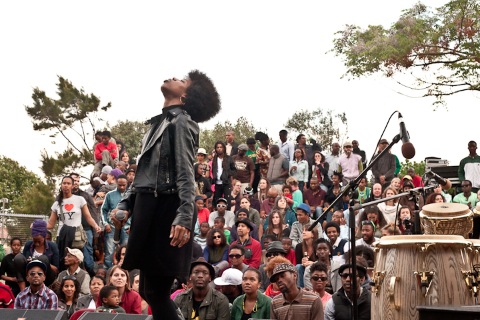 On the 15th of June 2010 a party in Observatory, Cape Town soured. An effort that had been organised by friends to celebrate my birthday and that of a close friend slowed and dragged. Text messages flooded phones, calls were rejected and friends hugged each other in small corners away from the prying eyes of those who were not aware of what had just happened. The passing of Busi Mhlongo came as would a message saying, “meet me at three, …  ( continue reading

This 66-minute documentary, explores race identity within the punk scene. More than your everyday, Behind the Music or typical “black history month” documentary this film tackles the hard questions, such as issues of loneliness, exile, inter-racial dating and black power. Through the ‘marsh’ pit stomp and head banging beats we follow the lives of four people who have dedicated themselves to the punk rock lifestyle. They find themselves in conflicting situations, living the dual life of a person of color …  ( continue reading

Bleaching the coast (a ‘real’ estate tug of war with a sight sore) I struggled to copy anything for last night’s screening of ‘The Uprising of Hangberg.’ I had too many questions; the media coverage on what is happening in Hout bay has been contradictory, scant and confusing. Through Facebook activists I found a few links and when I followed them I found little still. Last night, the people of Hangberg spoke; they showed us their wounds, spoke of them …  ( continue reading

Kings In Cape at PASS

1-3pm: Andy Williams breaks it down 4pm: Limbe– Gilbert speaks to Polyveran who is a a Kabaret singer and hosts Ngwayi Eugene Nfor, who’s brought his guitar and more songs, once more. 6-8pm: ‘We don’t talk No More’ Poetic Musings– This week Nonkululeko Godana is joined by Yewande Omotoso, a fellow pen-sive in con-verse-tion  with Phillipa Kabali – Kagwa, Diana Ferrus as well as Sindiwe Magona  about life, love, writing and the mundane in between.. Some musical accompaniment by DJ …  ( continue reading

Roger Young reports on the show at St Georges’ Cathedral on Mahala Wednesday, October 6th, 2010  images by Niklas Zimmer It’s Thursday night and I’m in church; near the back as usual. I arrived late to see the Kyle Shepherd Trio at St Georges Cathedral based on the assumption that because the More More More Future gig had started a full hour late on Tuesday, this would as well. The Cathedral is full and dark; Kyle Shepherd has already started. …  ( continue reading

Niklas Zimmer (played at PASS last night with Garth Erasmus and Brendon Bussy) was one of the photographers happy to play snapperazi over PASS Live. He’s shared his gumbo mix of all the day, artists, friends and family he captured on film. Zim, Zimmer, we Thank You!  ( continue reading

Internationally acclaimed filmmaker and artist Aryan Kaganof, Dylan Valley, the award winning director of Afrikaaps, and community representative Greg Louw screen THE UPRISING OF HANGBERG, their documentary on the human rights violations in Hangberg, Cape Town at PASS Studios on Sunday, October 10 at 6.30 pm. Through stark, often shocking footage and interviews they explore the aftermath of the recent police brutality on the Hout Bay community. Moving from character to character, perspective to perspective, the film is a complex …  ( continue reading