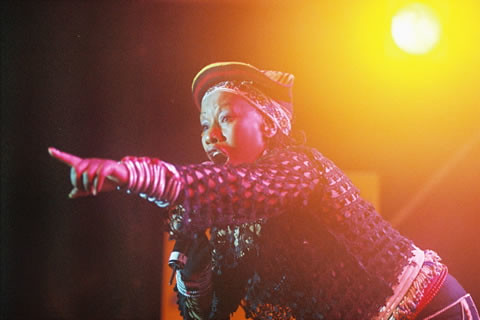 On the 15th of June 2010 a party in Observatory, Cape Town soured. An effort that had been organised by friends to celebrate my birthday and that of a close friend slowed and dragged. Text messages flooded phones, calls were rejected and friends hugged each other in small corners away from the prying eyes of those who were not aware of what had just happened.

The passing of Busi Mhlongo came as would a message saying, “meet me at three, at such and such” it came via text, I read it with one hand on a cell phone and another on a Windhoek Lager. This was not how I’d expected the news to reach me. When a family member passes, the family decides who it is who will call those who are far away to inform them of the loss. A friend in Durban had decided to text. My sister had called but I missed her calls, she called Bandile and asked that I call back. I called her twenty minutes after, she confirmed the text. I joined my friends and we danced.

The party mood changed, it seemed that once people got wind of Khulu Busi’s passing the need to dance to her music became the answer. We danced. I thought of my sister in Jo’burg, my brother who’s passed and a little caravan in Ntuzuma F section, Kwa Mashu.

Mondli, my brother was a pantsula, he enjoyed his spliff skoon, his white sneakers white and laughing with Khulu Busi. Whenever she was ‘home’ they would be in the small caravan, playing music she’d sourced from her travels and laughing at jokes only they understood.

The boys of the ‘Sip-sip’ Pantsula crew all had a close and private relationship with this curious older woman, who wore an assortment of beads, had an impish sense of humor and smoked her spliff skoon. The adults in the neighborhood understood her to be an ‘artist’ and everything she did then was shrugged off to be the eccentricities one ought to expect of an artist. For all these readings, Khulu Busi was a kind and sensitive person, an every ready smile with a don’t mess with my shit sharpness when provoked.

Seeing Thandiswa perform last weekend I remembered her sitting with her mentor, sharing private jokes and helping her up the steps at the Vuka Africa Busi Mhlongo tribute concert in 2008. I remembered that I had thought on seeing them together that this older woman, however curious, always seemed to have a joke, loved the company of and energy of young people. I remembered that when she danced on stage just a few weeks after being discharged from hospital, she laughed as she exited, “Eish, mhlawumbe lizong’ yeka manje ikhehla.”