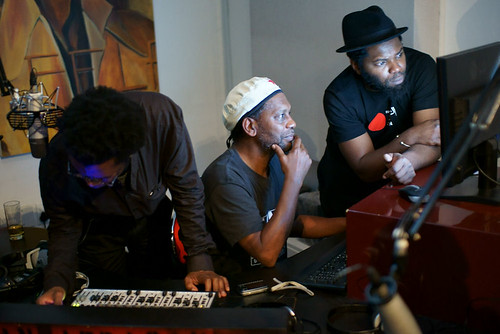 I’m in black and white, standard SA school uniform colors of years past and it seems my wardrobe choices for the day are on the money, I’m in an alternative classroom and the gentlemen playing teacher are Kolade and Andy.

Class commenced when Kolade played ‘guitar buy’ going back to Fela’s band boy days. When he mentions this I stare him down thinking he’s going to laugh at his own joke but Kolade’s serious. The giant I have in my mind and the young band boy are hard to put together but yeah, Fela worked with Victor Oyaefor, earned his stripes and en’Shrine’d his way into our consciousness. In ‘Big Blind Country’ Kolade has chosen to share the many faces of Fela, playing a song he’s both excited and embarrased to translate.

When Andy takes over the decks its clear that Day Two offers no recess. He considers his playlist a while and as he does starts talking about some of the musicians he’ll feature. In talking to Neo about some of the guys featured the two traverse the present and I discover Neo once worked with Talib’s mother or for her in a bookshop in the states.

“Man, did you hear that? That stuff they were saying about this dude being Talib’s dad, wow!! Anyway, who’s Randy Weston?”

Thabo rushes through all these questions thinking I have answers, I don’t. I could tell him he’s a childhood soundtrack and that I have a folder full of his music but I’ve just googled him and the officials on who Randy is are Neo, Anthony and Andy himself. My notebook is open and I’m scribbing some notes, Neo has a few personal firsts that feature Randy as mood music and Andy knows the artist to be a humble character who helped him get his mother into care in New York when she fell sick and he couldn’t make it.

“For months he’d call me and find out how my moms was doin’, he’s that kind of cat. Randy man,” Andy says, shaking his head.

What I didn’t know is that Randy Weston is Talib Kwali’s father, that Akon’s dad, Mor Thiam; is a mean ass drummer and what I’d forgotten was that we all start somewhere. The beginning is everything…