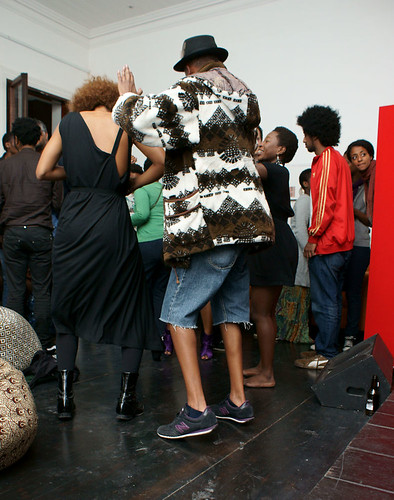 Its three thirty five, the PASS launch crowd is performing a ZCC stomp and the floor is threatening to cave in. I am fast begining to suspect that people have organised themselves replacements because as soon as one group moves out another equally energetic bunch takes their place… Hearing the on line broadcast on my headsets converts the scene around me into binary code, the energy of the live event has orbed from CT to…

The magic of the moment is made more palpable by the arrival of Marc, a shaggy haired blonde; he says he got a text saying friends were on their way home from the launch but the party was still going strong. He dressed, came to 44 Long Street and I’m sharing a fag with V when he approaches us asking, “What is this place?”

It’s a question he repeats until I head in, on my return I discover he’s decided it’s the best thing on the planet. Marc stays until six, passes out as Mattstax starts. I don’t blame him at ten fifteen only seasoned party animals own the space, well just one party veteran, a DJ, sound engineer and all of cyber space.