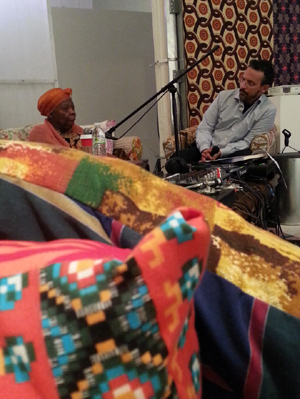 Nontsikelelo Mutiti‘s African Hair Braiding Salon at the Chimurenga Library in NYC provides a framework to publish and present a range of works that are physical and performative in nature.She gets the weekend programme started with a conversation on women in new media and technology with Torkwase Dyson, Samole Asega, Yulan Grant and Kimberly Drew (Black Contemporary Art). Next up, Africa is a Country present “Adrift: A soundtrack for migration,” the second of three panels, curated by AIAC managing editor, …  ( continue reading

Hisham Aidi is the author of Rebel Music: Race, Empire and the New Muslim Youth Culture, a study of how music—primarily hip-hop, but also rock, reggae, Gnawa and Andalusian—has come to express a shared Muslim consciousness in face of War on Terror policies. He hosts a conversation with writers Somali-American writer Abdi Latif Ega and poet, playwright, essayist and short story writer, Rashidah Ismaili Abubakr. “[T]he richest cross-fertilization that you have between American music and Islam is in hip-hop, that begins …  ( continue reading