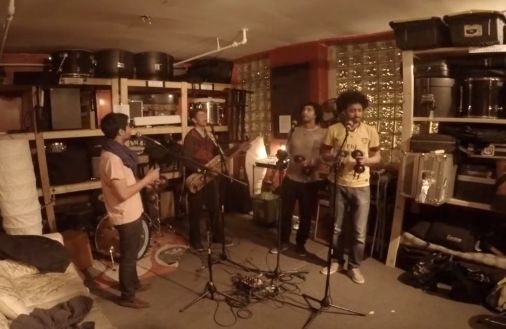 Nontsikelelo Mutiti‘s African Hair Braiding Salon at the Chimurenga Library in NYC provides a framework to publish and present a range of works that are physical and performative in nature.She gets the weekend programme started with a conversation on women in new media and technology with Torkwase Dyson, Samole Asega, Yulan Grant and Kimberly Drew (Black Contemporary Art).

Next up, Africa is a Country present “Adrift: A soundtrack for migration,” the second of three panels, curated by AIAC managing editor, Africa is a Radio host, and music section editor, Boima Tucker. A current and former member of the Brooklyn DJ collective Dutty Artz, DJ Ushka (Thanu Yakupitiyage) and Lamin Fofana, will talk about Fofana’s recent EP as a jump-off point to discuss migration — from what the Western media has dubbed a European “migrant crisis” stemming from Africa and Syria — to other examples of being “adrift.”

Into Freedwomen’s Bureau (Sharifa Rhodes-Pitts) presents a marathon reading of We Charge Genocide, the historic petition to the United Nations for relief from a crime of the United States government against the negro people (1951). Rhodes-Pitts is the author of the critically-acclaimed Harlem Is Nowhere: A Journey to the Mecca of Black America. She is working on a trilogy about African-Americans and utopia and recently launched BLACKNUSS: books and other relics, a new bookstore in Harlem.

This is Hashim Aidi on gnawa: ”Their music is believed to heal people possessed by jinn, or spirits. The rise of this music, which began, in the nineteen-fifties, as a marginalized Sufi practice but has become arguably the most popular music emerging from the region today, is a question that nettles scholars and ordinary North Africans alike: How did Gnawa music become our national music? Of the myriad Sufi orders that use faith healing, and of the countless North African genres known for polyrhythmic syncopation, why has this one grabbed Western listeners?”