Playing with electricity (vol2): a tribute to Robbie Jansen 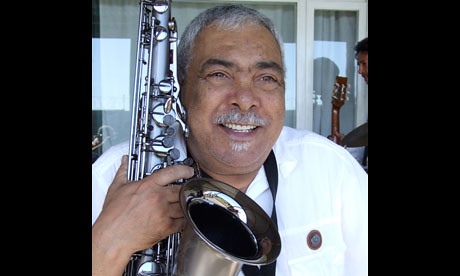 Writer and activist Steve Gordon expresses below how we feel about the man:

The reputation of Robbie Jansen, hailed variously as “a son of Table Mountain”, “the Cape Doctor” and the “Bad Boy of Cape Jazz”, preceded him as surely as it now survives him.

He was acknowledged nationally but the intimacy and depth of his audience rapport was amplified in his home, Cape Town. Jansen entertained, cajoled and inspired generations on the southern tip of the continent, whether as soloist, sideman, bandleader, popster or jazzman.

Just as pictures of smiling flower­sellers and gap-toothed fisherman are small change when iconising all that is Cape and coloured, we would short-change Jansen (and ourselves) if we remembered him simply as an instigator of “Cape jazz” or as a “jazz hero”.

Jansen was a man of humility and had an inquisitive character. His ability to share the questions residing in his own mind was the gift that propelled his artistry. He would question musically and philosophically. Generations of Capetonians grew to know and feel Jansen to be their friend and confidant.

He wielded an armoury of communication skills, starting with street suss, eloquent lyricism, musicality, technical proficiency and a wicked sense of humour. His reading of audience moments was incisive. Jansen was in no ways limited to the Cape but was at his best working that terrain.

Cape Town, like most ports, has layers of cultures, power, languages and, of course, sounds. Whereas the apartheid regime designated a “coloured population group” to package that diversity crudely, Jansen spent most of his life unpacking Cape Town culture, its identity, lies, beauty, pain and humour. He inspired and mentored others to explore and find lineages and links.

It was in the 1980s that Jansen’s name became synonymous with the political struggle and it was in those times that the same questions that he journeyed to answer personally resonated intimately with the cultural struggle. It was at that time that I was first privileged to work with him.

“Robbie Jansen’s gonna take a blow with us,” said Basil Coetzee, gesturing that another microphone was needed for the second set.

I’d never heard Jansen play but I’d heard of him. He had recorded with Abdullah Ibrahim, first, for the Underground in Africa album, then the classic Manenberg in 1974. By the early 1980s, Ibrahim was a legend in exile, part of a music ripped away from his audience, banished from the airwaves and home ears. Coetzee and Jansen came to be considered musical commanders of the internal wing.

Coetzee and Jansen had taken different routes post their Manenberg contributions: Coetzee, a cultural activist, was disdainful of commercial music, virtually stopped performing and survived as a factory worker. Jansen, a pragmatist and showman, hit the road with a succession of bands from pop to fusion. But more later about Jansen’s journeys.

The 1980s came with new resistance and cultural reclamation and it was in that context that first Coetzee, then Jansen, moved centrestage as the pillars of cultural struggle in the Cape.

As an inexperienced if enthusiastic sound engineer, I regularly assisted Coetzee and bassist Paul Abrahams as they re-emerged from dormancy, playing as a duo on the side of rallies and at civic meetings. That night, to support a strike concert in the early 1980s, they were joined by drummer Jack Momplé, forming a trio, which was the precursor to Coetzee’s band, Sebenza. And now Jansen was dropping in, after a club set on the Cape Flats.

Repositioning a microphone, I waited while musicians smoked and comrades chanted. The set began with Coetzee’s tenor and Jansen’s alto positioned in unison, side by side, locked in harmony. Feeling each other out, they were soon nudging their own twists, then back to the top, synchronised and snapping together like schoolboys in line for teacher. Then cartwheeling apart, each stamping his own embellishments and improvisations with each cycle. Coetzee and Jansen sparred into the night. It was Coetzee’s gig, but Jansen had a lot to say. He propelled missives alternately with alto, flute and voice.

Many memories of Jansen to many people make his legacy. That’s my earliest memory — the exhilaration of watching and listening as he inspired each musician in the trio. Each man had his say, the competition locked in mutual space of tranced improvisation. Coetzee rose to Jansen. Jansen respected Coetzee.

Chatting in 2009, while listening back to a live-gig recording from those times, Jansen recalled his mind-set. “I’d heard these two guys [Coetzee and Abrahams] play and I admired them. I so admired them for what they stood for. While we were playing pop music to stay alive, Basil refused. And Paul refused. They didn’t want to play this kind of music. So, through admiration, I went up to go and play with them, and I followed them, you know.”

Jansen did some sessions on some of the Sebenza tracks for Mountain Records in 1988 and he guested with Sebenza from time to time, but he was never a full-time member of the group. He released his debut album,Vastrap Island, with Mountain Records the following year.

Freedom is the central theme threading through Jansen’s work and life: free jazz, freedom jazz. Spiritual freedom and, of course, the freedom struggle. Freedom was not his bumper sticker; it was his inquiry and quest.

The composition, How I’d Love to Feel Free, is maybe his finest ode to freedom. As a singer, he addresses freedom. Childlike and chatty, the first verse coaxes; “Are you here? Are you there? Freedom where have you been hiding yourself, I’ve been looking all over.” Then, in shocked desperation: “Are you real?” Or (punctuating his question, as though thinking aloud): “Do. You. Just. Exist, in imagination of my song?”

Interludes of flute solo cool down the fever and puzzlement of inquiry, allowing artist and audience to reflect and distil the question. If freedom was the stated goal of our struggle, it was Jansen who prompted just how distant and unknown it felt in bleak times of personal or political struggle. He interrogated freedom, as he would a stranger — or perhaps as a long-lost friend or lover.

Elsewhere, his search and quest for this elusive freedom is aggressive: music and words rise to a crescendo of sibilance, akin to police hunting down a fugitive: “Ons SOEK hom. Ons MOET hom kry. Ons SAL hom kry. ONS gaan hom kry!” (and bee bah, beee bah, the horn mimics a police siren). Again, a cooling, calming flute solo after the heat of the freedom search.

The metaphors of fire and soul hold currency in much popular music. “Can you feel that little spark in your soul,” sang (almost whispered) Jansen. “Once a fire, and now just a glow. Raging fire reduced to a glow.” Then, crescendo scream, Jansen awakes from the doubt, kindles the fire: “I am the fire, burning so bright.” Key change, and the question is resolved through a confident, flying “How I’d love to feel free”. Jansen was a master arranger.

Jansen played with The Rockets (the group remains a staple of Cape Town pop to this day), jazz fusion band Pacific Express, Workforce, Spirits Rejoice, Oswietie (in newly liberated Angola), his beloved eStudio and Juluka. He played with the minstrels in the carnival, in langarm.

At Jansen’s funeral, when the pastor asked those who had played with him to rise, the seated were obscured. From 20-year-olds to veterans in their 60s and 70s, from Harfield Village to Elsies River, Sea Point and Gugulethu — and beyond the peninsula: Saldanha, the Boland, Jozi and the Eastern Cape.

Jansen was a crossover person, a man of no boundaries. He covered and improvised the compositions of Marvin Gaye (What’s Going On) as passionately as he interpreted indigenous Khoisan melodies and the rhythms and message of reggae. Such was his freedom.

Music strips us of words. And where words escape or confound us, we seek refuge in music. Jansen was a magician who, amid the aggression and brutality of struggle, could use his musical craft to soothe and calm us. And when we were down, he could comfort, then rouse us.

Fittingly, at his last Cape Town show on the Grand Parade in June, he humorously negotiated (rather than admonished or pleaded) with the vuvuzela-hooting audience to hold back, because “we’ll be the musicians for this short while”. Elsewhere, during the World Cup, when filler entertainment included live performance, musicians struggled to pitch themselves against the persistent drone.

Many, in fact, surrendered, defeated. Gigs were cancelled.

In that boisterous rowdiness of Cape Town, Jansen, plugged to oxygen, was the one and only person I ever witnessed who silenced the vuvuzelas. People listened to Robbie Jansen. Cape Town will miss his gentle authority.