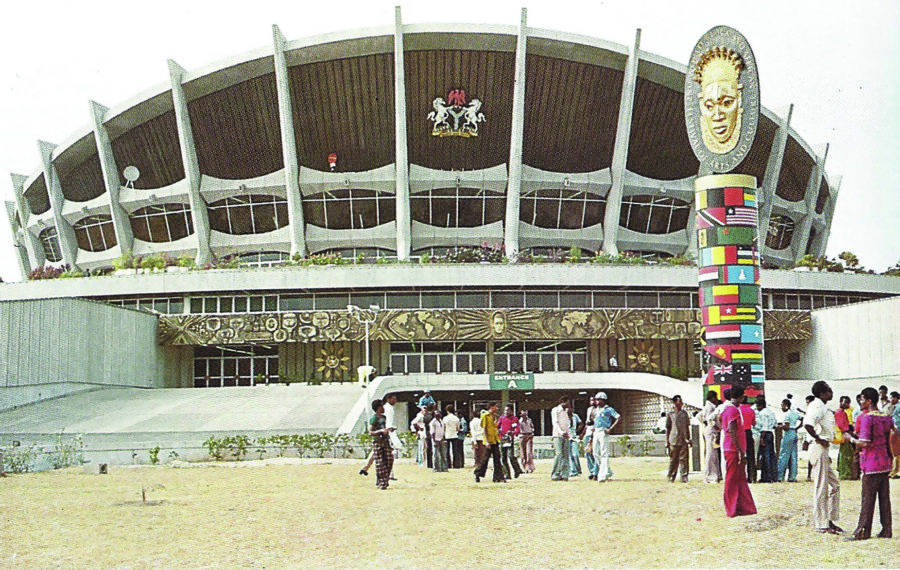 From Wednesday, 17 – Saturday, 20 February, 2021, Pan African Space Station (PASS) broadcast a daily session, produced for ‘Actions of Art and Solidarity’, a group exhibition curated by Office for Contemporary Art Norway (OCA) in Oslo and organised with Kunstnernes Hus. These PASS transmissions unpacked and expanded stories and research published in the Festac ’77 book in which we revisited the imaginative (im)possibilities of pan African festivals (the PANAFESTs) that took place in the utopian moments of the post-independence era.

Day 1, Wednesday 17 February:
Benin 1897 to Festac 1977, re-membering Erhabor Emokpae.
What are the legacies of Benin 1897? And how did the art of Erhabor Emokpae, designer of Festac’s visual identity, reignite the debate? Considering restitution debates and politics and the significance of Erhabor Emokpae, PASS hosted a conversation featuring Emokpae’s son the visual artist Isaac Emokpae, his granddaughter Ese Otubu, and the late Erhabor Emokpae himself.

Day 2, Thursday 18 February:
Freedom and Control, Technology and Science: a conversation with Arild Boman.
On this day in 1977, Agege Motor Road in Lagos, Fela Kuti’s Kalakuta Republic was infamously rampaged by military police. Arild Boman, a scientist, educator and experimental musician, witnessed the scene while attending Festac as a broadcasting consultant for the Norwegian Broadcasting Corporation (NRK). In this PASS session we inquired how, with colleagues at the University of Lagos, Boman came to co-produce a remarkable Festac questionnaire and co-organise the Festac ’77 Video Art Workshop.

Day 3, Friday 19 February:
Pan-Africanisms, Afro-Asian movement and Tricontinentalism.
Exploring red and black solidarities, PASS listened to a variety of voices, including Uhuru Phalafala and Christopher Lee, about conferences and festivals, Alex La Guma’s Soviet journeying, the project of Third-Worldism, and networks of writers and artistic groups culturally working for liberation.

Day 4, Saturday 20 February:
Amandla! Power to the people and poets: a conversation with Lindiwe Mabuza.
PASS welcomed an ambassador of cultural-politics, scholar-poet Lindiwe Mabuza to share stories of her consciousness-raising and activism in the USA, then at Festac ’77 and as the ANC’s Chief Representative in Sweden where she helped conduct the movements of Amandla Cultural Group.