‘And the wind cried Mary’ 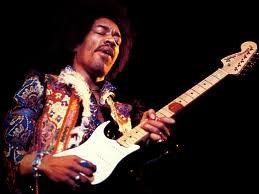 Forty years after his passing Jimi Hendricks lives. Jimi was a dirty uncle, one who crooned “Foxy Lady” to girl 6 years old in a house filled with adults slurring expletives of the extra terrestrial kind.

I had no idea what he meant or who he was talking to. As plain as the lyrics are, the censorious nature of the song at least for a six year old, were lost to me. What made the song special, what earned Hendrix a place in my heart like no other musician was the way he whispers ‘foxy’ at the begining of the song and expression itself.

What got me going was imagining that he couldn’t go to sleep without his piece close by, that he wanted it like he wanted that ‘foxy lady’. I was and am still convinced that when he sung that song it was dedicated to an illusive riff, that itched at the tip of his fingers refusing connect heart string to guitar string.

With that conclusion I had cured a palate for a music crediting Fishbone, TV on the Radio and other punk/rockers of the charcoal kind. Jimi was a dirty uncle, who synthed me to sleep, set me jumping on furniture and earned me much punishment- you don’t just hop around on rent-to-own property.