“If you don’t know what tomorrow will bring, any future is possible”* 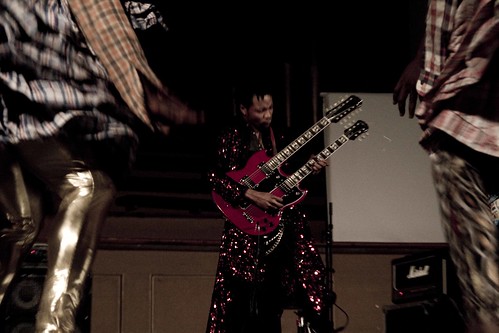 there was no stampede, no rush at the doors. people chose their bean bags and sat, quietly waiting for ntone’s cue, who waited for anthony’s cue. the jingle played us in and Faustin Linyekula was introduced.

this was monday night. with just a sprinkling of people sitting on the orange couches Faustin spoke about the need for imagining or dreaming the new- desiring and demanding that the present be outed for not being enough. i quote him a few hours later, his assertion that dreaming of a future that offers more, can be a subversive act or thought in a place void of any positivity, appeals to me. a lot of what he says makes me glad anthony is recording this conversation.

Throughout, those in studio stand up to ask questions on various topics/issues and Faustin takes his time in answering, peeling each answer layer after layer to arrive at a startlingly poetic full stop.

last night as i entered the city hall, the venue where Faustin and his band of mad magicians were busy tweeking their performance in the desperate last minutes of a dry run, i step over knick knacks littering the path. these pieces of stage frills and accessories lay rejected in a shell that is both home and pavement to them, seem to be the precursor to what awaits me when guitarist Flamme Kapaya plucks the first chords luring me into a vortex of More more more Future.

swirling in Faustin’s high voltage soup, i sit smiting from the sting in Antione Muhindo’s poetry, projected onto a small screen and gutturally rendered by a gold suit clad vocalist and scream finally when the pressure building from within my chest is too much to take. theater etiquette be damned, the punches delivered by punk rhythms, undreamed of choreography; somersaults from the stage to yank me from my seat to jump and scream from the aisles.

i find my seat again, listen and watch the rest of the show with Antoine’s words ringing in and out, bleeding from some other place. I clench and unclench my fists in ‘yes’, ‘now’, agreeing with a man i’ve never met, who invites me to some other place, where imaginary realities are the bricks to an ever changing facade.

Studio Kabako left cape town at seven this morning, you didn’t see them. i hope you spend some time trawling the internet to find out when their tour brings them to your backyard.