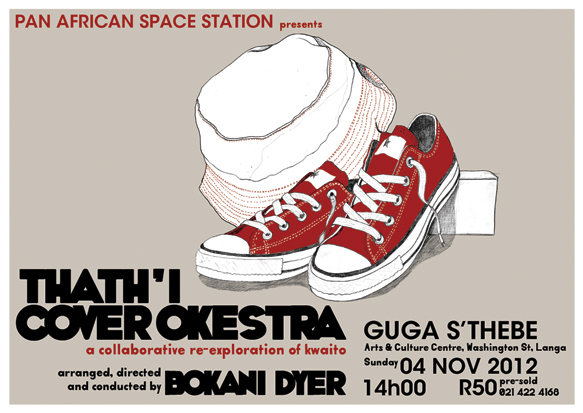 “Waar was Jy?” asked kwaito crew Skeem in their 1996 pumping house, ragga and rap hit with the same title. “Where were you?” they asked, back in the 80s; in the days when Brenda Fassie was running things; the days of Jomo Sono’s Pirates and Spiderman; of Chaklas Chaklas, Skoro-Skoro, Chicco’s Soldier; of perms, pantsulas and breakdance?

For many of the young members of Thath’i Cover Okestra the answer is simple: I was still a kid or I wasn’t even born yet. But that hasn’t stopped the 11-piece ensemble from creating its own rendition of Skeem’s classic. The track is just one of the many kwaito classics recorded between 1994 and 2004 that they have revisioned for the project.

The brainchild of Rangoato Hlasane and Malose Malahlela from Keleketla! Library with support from the Goethe-Institut, Thath’i Cover Okestra invites a crew of young independent Joburg-based musicians to investigate the meaning and importance of kwaito music’s legacy for a new generation.

The result is a joyous mix of free jazz with wry 50s Sophiatown quotes, Marabi, rhythm and blues, sexy soul and edgy beats that situates kwaito within a long tradition of black music, giving voice to the pains and pleasures of history while also celebrating contemporary urbanity.

Originally put together as part of the Shoe Shop project, an urban art initiative staged in Joburg earlier this year, Thath’i Cover Okestra are now making their Cape Town début as a part of The Pan African Space Station (PASS).