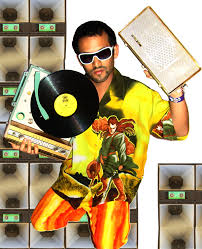 DJing from satellite set up in Bogota. More on Lucas Silva of Palenque Records here.

Palenque Records make their intentions clear: they are dedicated to Afro-Columbian music. The label was founded in 1998 by Lucas Silva (aka DJ Champeta-man) and takes its name from San Basilio de Palenque, a town in northern Columbia. Palenque’s debut compilation, Champeta Criolla, New African Music from Columbia, is cited as the first time such sounds were circulated internationally and in addition to music they release directly, they also champion sounds for other labels to put out, such as European-based labels Soundway and VampiSoul. Legendary …  ( continue reading