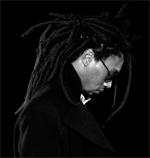 Fusing the intricate head-nodding beats of hip-hop legends Bone Thugs-N-Harmony and with the other-worldly Xhosa harmonies of his native Eastern Cape, Johnny Cradle is something of an enigma.

Describing his sound as roots electronica fitting “right between Ladysmith Black Mambazo and the nerd scoring virtual bleeps on the computer screen,” Cradle is a beat technician with the dexterity of a turntablist, a punk with the bleeding heart of a soul star and a rapper with the vision of a poet. Mixing his smoke-breathing, lizard-larynxed growl with vulnerability and sweetness, he can take you on a neo-soul trip, skank you down dub lane or lyrically speak you into da corner – all on one track. PASS people will remember his now-future tangled roots electronica and sci-fi hair from his Albert Hall performance at the 2010 live sessions.