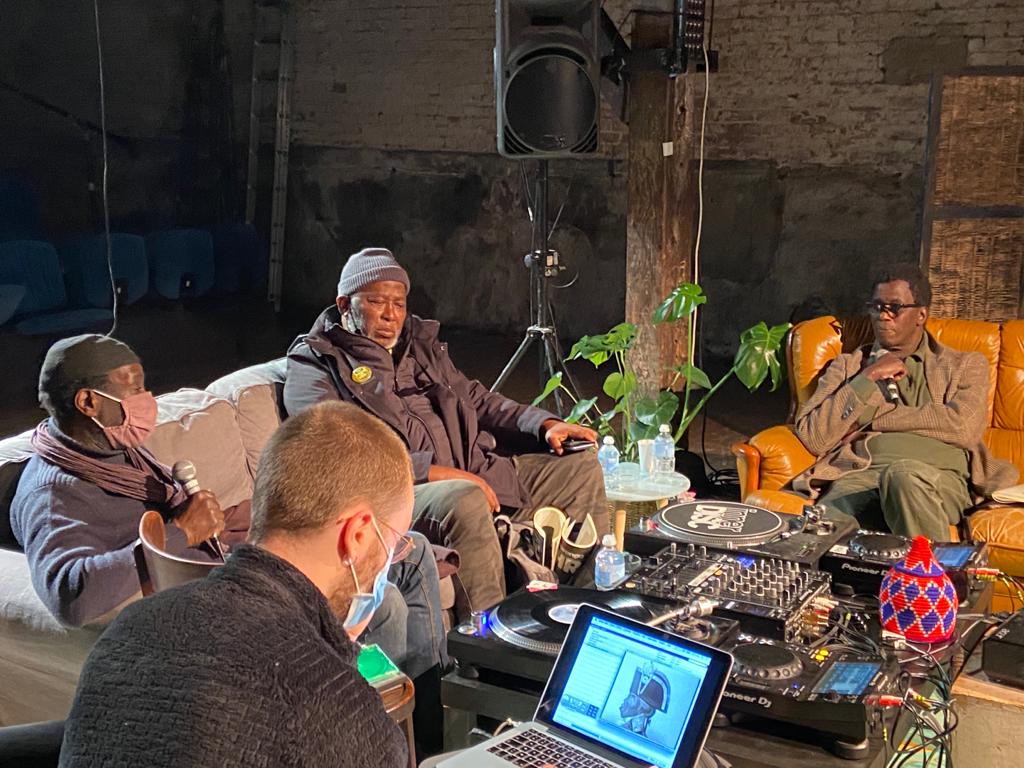 From 5-9 May 2021, Chimurenga’s Pan African Space Station (PASS) landed at Lavoir Moderne Parisien in Goutte d’or, Paris, to imagine, re-examine and re-circulate sonic archives of black radicalism in the francophone world. This session dug into the “soundtrack” (bande-son), an underlying container of information and ideas that is seldom explored on its own terms.

We departed from cinematic practice, specifically films/filmmakers (Julius-Amedee Laou, Elsie Haas, Med Hondo, Kanor sisters, Sarah Maldoror, etc) represented in the printed archive we had recently installed in Centre Pompidou, and expanded the soundtrack beyond the screen to other areas of knowledge production: the street, the club, recording studios, kongossa, live performances, noise, even the magazine page.

We imagined a live in-studio soundtrack that responded to and expanded visual footage from the 2nd Congress of Black Writers and Artists in Rome 1959 – an event charged by the-then process of decolonisation and the unwelcome presence of younger, radical thinkers such as Fanon, Beti, Glissant, Beville and more. We took the cues from Fabienne and Véronique Kanor’s “La noiraude” to explore zouk as aesthetics of black transnationalism – a geography of unauthorised pleasure throughout the 1980s. We listened to Sarah Maldoror’s record collection, and her use of music on film.

In Julius-Amedee Laou’s “Solitaire a micro ouvert”, the brother of a man killed in a racist murder in Paris of the 1980s takes over of a black radio station to address the “community”. In “La Vieille Quimboiseuse et le majordome” he highlights the dialectic between the seen and the heard. We listened to the oral history of “La coordination des femmes noires” that writer Gerty Dambury continually produces; or Gerard Lockel’s development of gro ka moden as decolonial praxis; or the Paris-based afro/astrosonic network documented in the music Jo Maka, Ramadolf, Cheikh Tidiane Fall, Yebga Likoba and more, which not only connects directly to Maldoror’s film “Un dessert pour Constance” but also puts sound to the immigrant struggles of the post-May 68 era. And brought us to the ongoing gentrification and structural violence in Goutte d’or.

We considered Frank Biyong’s retelling of the war of decolonisation in Cameroun in his album “Ibolo Ini”, and more broadly his use of music as site of memorialising; and explored black ecologies through sound.

We presented “Act 2” of Christian Nyampeta’s acclaimed radio-play “The Africans”.

Recorded sessions from the landing are available for replay via PASS on Mixcloud.