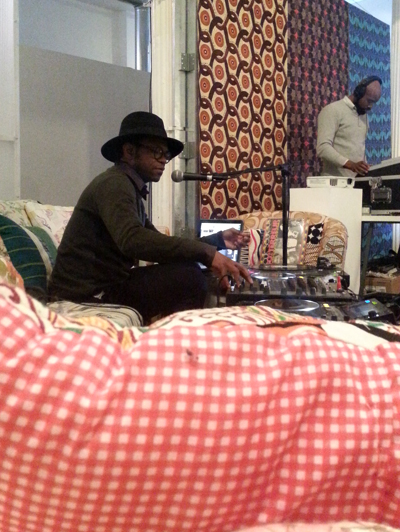 Composer and musician and a co-curator of the Pan African Space Station Neo Muyanga is back with more Revolting Tunes that engage the axis of black music and the aesthetics of protest. The performance lecture is part of Muyanga’s ongoing, multi-focal exploration of protest music. The project spans from how protest songs played a key role in South Africa’s liberation to the role of liberation music in Egypt, Brazil and Uruguay. He hosts discussions and performances to explore these themes with NYC based musicians.

“This is ugly beautiful. One of the roles of music is to do that. It’s position is between things… Nothing is fixed. We can always invent, change. Sometimes that means we have to destroy. That’s okay. It opens that space to build afresh. Music teaches us that. At the moment it feels like we’re in a shit space. But that bodes well for our future. What comes next? How do we get there? That’s my question.” Neo Muyanga, “In The Listening Room,” Chimurenga 16: The Chimurenga Chronic (October 2011)

Neo Muyanga is a composer and musician and a co-curator of the Pan African Space Station. He works across genres – from classical to hip-hop, jazz to pop, and electric guitar to operaand writes, plays, and composes for chorus, chamber, and large ensembles. He has also composed music for and toured with Britain’s prestigious Royal Shakespeare Company and South Africa’s celebrated Handspring Puppet Company. He is a fellow of the Aspin Global Leadership Initiative, a research fellow at the University of the Western Cape and has a WISER–DUKE writing fellowship.