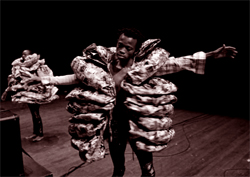 It’s the story of the Congo and its brutal history, but it’s also a story of here and now, one that transcends a nation and thereby redefines our sense of belonging to history and the world.

Much of the story is told in between repetitive images of bodies, grotesque and unexpected, that pervade the work. Music, costumes, language and imagery exist as physical entities—body-states, bursts of muscles, violent flashes of colour, ass shakes and beats that plough forward in phase after phase of fever-frenzy. Punctuated with propulsive, unforgiving, seething poetry, the performance literally writhes on the stage; each voice, each body, each beat, twisting in on itself.

Here, bodies vanish into zombie states. The scream replaces language, a metaphor for those who have no voice, no ability to speak against the horrors of colonialism and violence. The intense locked groove repetition soon attains a kind of agitated stillness, a thrashing stasis.

Temporality is called into question, as the mind remains frozen in a past that can only be resolved in a future that never arrives, or that seems ever the more ominous, until all that is left is a barely substantial tissue of reverbed voice and music: the sound of a band disappearing.

Everything is lost except the barest whisper, the most basic beat… at a certain moment for the person who has lost everything, their soul and their country, music becomes the country, a link back to the past and therefore a way forward to the future.

Through sound and voice we can look inward, break through the enslavement of history and nationality and free a spirit at once personal and receptive. Returning here is not a rewind, an eternal return that replays the past but a critical, creative process of reinvention.

More more more… Future is a gift: a twisted thing, tortuous, delicate, eager, insatiable, the best, and worst thing, the junction point between everything and nothing, between hope and hopelessness, between today and more, more, more… future!