Mr Davis would have been 85 today. We let the man say it himself in a mash-up of our favourite quotes: 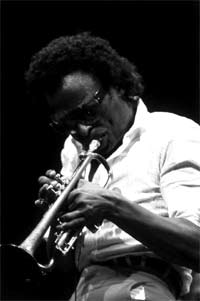 “For me music and life are all about style. If you understood everything I say you’d be me. Do not fear mistakes – there are none. Nothing is out of the question for me, I’m always thinking about creating. My future starts when I wake up in the morning and see the light, then I’m grateful. When you’re creating your own shit man, even the sky ain’t the limit. Don’t play what’s there, play what’s not there. The thing to judge in any jazz artist is: does the man project and does he have ideas? I never thought that the music called ‘jazz’ was ever meant to reach just a small group of people, or become a museum thing locked under glass like all the dead things that were once considered artistic. I play, I play it and tell you what it is later. It’s always been a gift for me hearing music the way I do. I don’t know where it comes from, it’s just there and I don’t question it. Sometimes you have to play a long time to be able to play like yourself. ‘Jazz’? Hah-hah, jazz is the big brother of revolution and revolution follows it around.”