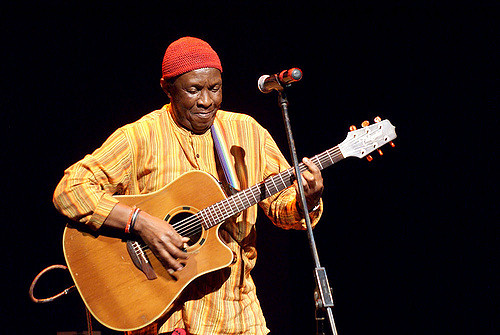 Known to many simply as ‘Bafo’, Madala Kunene is undeniably one of the best guitarists to have come out of Durban. This eclectic musician has an aura of calmness and wisdom that is meticulously replicated in his music – deep-rooted in spiritual and traditional rhythms. Bafo has performed his trance-inducing sounds at festivals around the world and collaborated with the likes of Busi Mhlongo, Mabi Tobejane, Moses Molelekwa and countless others. In 2003 he composed the score for Oscar-award nominated Yesterday – the first ever full length feature film in Zulu.

For his appearances at PASS in Cape Town, Bafo launched a concept titled “Sounds in the Darkness of Light”, a solo performance in complete darkness. This places the audience in a realm of darkness where only sounds illustrate the images of one’s immediate surroundings. A realm well understood by the visually impaired, who dwell in it daily. Members of blind societies from surrounding communities were invited to the event and escorted the artist himself onto the stage.