Reaching out to the ‘outer limits’ 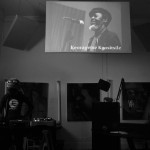 These teasers are sandwiched between updates of Abbey Lincoln,  Pius Njawe, Robbie Jansen, Ezra Ngcukana and recently Lewis Nkosi who have passed between July and August 2010. The choice to click between Georgia Anne and Abbey Lincoln videos creates the musical middle space that is PASS; a merger of the present world, past world and worlds futuristic.

As we launch the mother ship PASS radio will play host to an array of ideas exemplified by the likes of Pius Njawe and Lewis Nkosi serving as an uncomfortable reminder of our mortality, their indelible contribution and the legacy of those willing to travel to the outer limits.

The heel kicking stomp starts with a tribute to Biko (12/09), for those in pursuit of a textual and musical tonality ringing on the borders of human consciousness… We have lift off!!