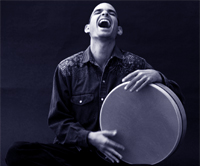 Born in London, he spent much of his childhood in South Africa growing up with a love of rock and African music and rhythms. A move back to London opened up a world of musical diversity and he played with all kinds of bands touring round England and playing at many festivals including Glastonbury. Years of travel followed to Australia, Europe, Canada, India, Pakistan, Israel, Egypt, Turkey and more where he absorbed different philosphies, languages, stories and musical styles.