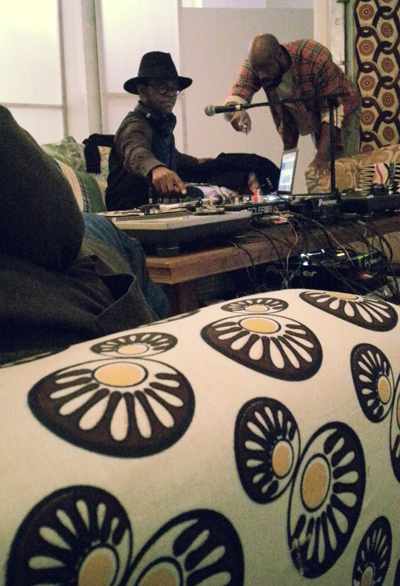 Africa is a Country are in studio to get the weekend started with “Block The Road: The Sound of Afrosoca,” an exploration of the recent explosion of cross-Atlantic exchange between Caribbean and African musicians, with Rum N’ Lime Radio co-hosts – Queens-based writer and academic Rishi Nath, and DJ, producer, and Trinidadian Soca ambassador DLife.

Next, composer and musician and a co-curator of the Pan African Space Station, Neo Muyanga is back with more Revolting Tunes that engage black music and the aesthetics of protest. The performance lecture is part of Muyanga’s ongoing, multi-focal exploration of protest music. The project spans from how protest songs played a key role in South Africa’s liberation to the role of liberation music in Egypt, Brazil and Uruguay. He hosts discussions and performances to explore these themes with NYC based musicians.

PASS Pop-up NYC resident, Nontsikelelo Mutiti steps out of her onsite braiding salon to join  writer Tinashe Mushakavanhu in a reading of The Hairdresser of Harare. After that CapitalBop.com editor and JazzTimes contributor, Giovanni Russonello talks on currents in South African Jazz, and plays the tunes.

Finally, Coco Fusco shows us her Dangerous Moves. The Cuban-American artist and writer draws on her new book, Dangerous Moves, to discuss performance and politics in Cuba, with a focus on Cuban hip hop.