Franck Biyong – LIVE at Centre for the Book, Cape Town 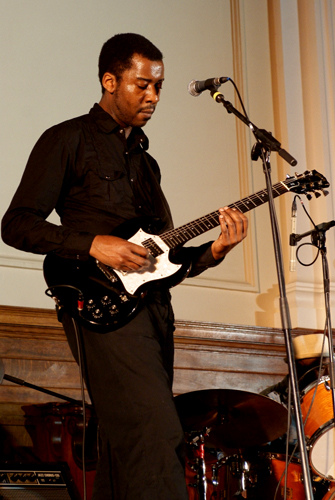 Cameroonian composer and producer Franck Biyong operates outside the boundaries which map the trajectories of African musicians in and out of the continent. After migrating to France in the late 80s, he consciously bypassed Paris and Brussels’ factories of Afro-pop slickness to establish himself as an electro producer in the London Underground. And although he formed Massak in 1997 as an Afrobeat ensemble-tribute to the legendary Africa 70 and Egypt 80, he used the band as a platform to project the music forward – a sound he called “Afrolectric”.

As a producer and musician, Biyong has collaborated with Afropolitanist greats such as Keziah Jones, Tony Allen, Cheick Tidiane Seck and many more; and released several 7′ and 12′ on dance labels such as BBE, Compost, Soul Fire and the rising Truth & Soul. He wrote and performed an opera, in memory of the poet Aime Cesaire, titled Knowledge-Identity-Reconstruction. He’s currently at work on a new Massak LP in collaboration with bikutsi legends Les Tetes Brulees.