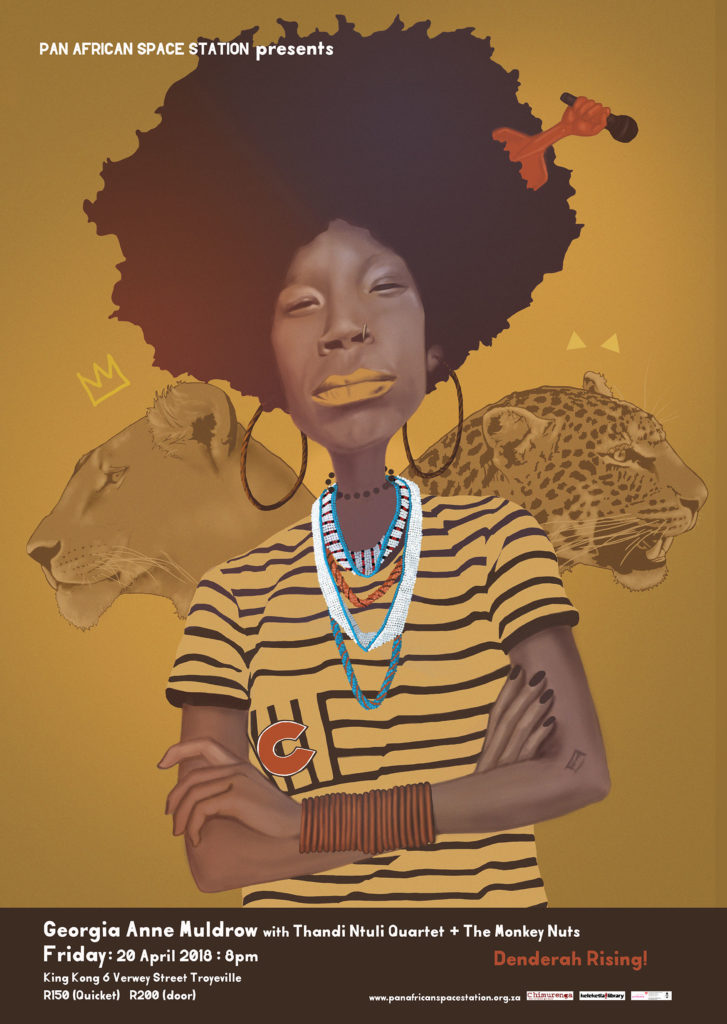 “Sound is defined by vibrations that travel through the air or another medium and can be heard when they reach the ear. Yet there is more to it when one imagines the hearing process as an involuntary command placed upon the body to be processed instantly. This realization can lead us to use sound as a means to inoculate one another with positivity, encouragement, and a connective awareness if we so choose. In our earth’s recent history, there has been a decline in the respect for this knowledge and a reward has been paid to those who willingly broadcast destructive sound wave commands across Planet Earth as a means to incapacitate its inevitable spiritual ascension. Even so, there are those who await vibratory commands from beyond this dimension in order to awaken a revolution of the heart.” – Georgia Anne Muldrow

Chimurenga is delighted to welcome back Georgia Anne Muldrow and her “ancestral orchestra” to the Pan African Space Station (PASS) for what will be her first concert in Johannesburg. Ever astral traveling via her independent imprint SomeOthaShip, Georgia Anne Muldrow has been blessing us with her productions, compositions, vocals (sung or MC-ed) and truth-telling fonk for over a decade, under various aliases (Jyoti, Ms One…).

Born to jazz musicians in Los Angeles, Georgia Anne Muldrow was born for this very purpose – to make her vocal style, rhythmic production and multi structured songwriting that are so highly sought after. Mos Def says she “sounds like Nina Simone, Roberta Flack, Aretha Franklin and Ella Fitzgerald rolled in one”. Erykah Badu says she “sounds like Alice Coltrane and J-Dilla rolled into one”. Others say she’s like “Herbie Hancock, Betty Davis, and Angela Wimbush rolled into one”. Whatever it is, she’s standing on some mighty shoulders, slinging a bag of her own.

The Monkey Nuts are an alternative hip hop ensemble and visual arts collective based in Harare. Members include musician Impiaipeli Maphango, emcee and writer Joshua Chiundiza and musician and graphic designer Tino Tagwieryi. Their sound is a mix of Chimurenga/Jit and hip hop rhythms, blended with electronic tones, crowned with a visual aesthetic that celebrates their Southern African heritage.

Advance tickets (R150) can be purchased at http://qkt.io/DenderahRising.