A tribute to the life & work of Franco 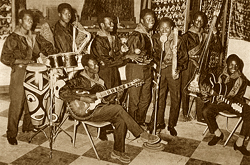 Twenty three years after his death in Belgium in 1989, DJ Ntone goes crate digging though his massive body of work: nearly two thousand songs, many of them the full length of both sides of an LP, to pay tribute. La Rumba OK!

Preview of TPOK Jazz music below: